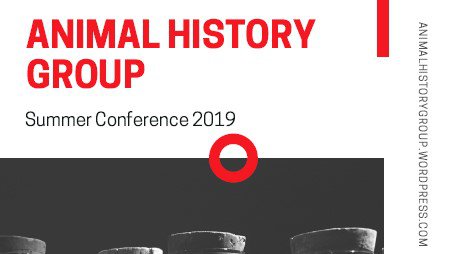 In early June, Abigail and I attended the annual conference for the Animal History Group (AHG) based at King’s College London (KCL). The AHG is convened by Abigail’s PhD students including Elle Larsson, Alison Skipper, Felicity McWilliams, Alex Bowmer, Scott Hunter, and myself. Elle, Alison, Felicity, and Alex started the group in 2016 because they wanted a space where they could share ideas about animal history and there wasn’t group in London at the time. Throughout the academic year, the AHG organizes monthly seminars and occasional activities. The AHG also organizes an annual seminar every June. In its short history, the AHG has grown from being a small reading group to one that attracts many different people. This year we heard presentations from academics representing 12 different institutions and we had attendees travelling from across the UK as well as the United States, Australia, New Zealand, India, and South Africa.

The topics covered in this year’s conference were incredibly diverse. From the politics of termites, to Rothschild’s animal collections, there was something for everyone. While I found all the presentations incredibly interesting, I am going to highlight a few that connect with the FIELD project thematically.

First, I want to talk about two papers that showcased the impacts of technology on agriculture in the 20th century. Felicity McWilliams from KCL presented ‘Equine Machines: Horses and Tractors on British farms, 1920-1960’. In her presentation, Felicity explored the changing role of the horse as it was slowly replaced by the mechanical tractor. Felicity challenged the notion that the introduction of the tractor was a straightforward revolution that replaced a needy animal with a machine that could simply be shut off. Rather, Felicity argued that the horse played a role in shaping the conceptual and practical identity of the tractor. Felicity used the example of tractor manufacturers care instructions to illustrate this, saying that the manufacturers often emphasized the similarities between horses and tractors in order to encourage better maintenance of the machines. Felicity’s presentation provided an alternative narrative to the simple replacement of horses with new technology, instead showcasing their role in shaping the technological landscape British farms in the 20th century. Following Felicity, Karl Bruno from KTH in Stockholm presented ‘A Great Biological Experiment: Use and Users of Artificial Insemination in Swedish Dairy Cattle Breeding, 1935-1955’. In this presentation Karl described how artificial insemination (AI) impacted cattle bodies and the notion of expertise within cattle breeding. According to Karl, early experiments demonstrated the necessity for a veterinarian to administer the technology. In addition, these veterinarians found that the technology was only successful with highly sexually motivated cattle, and this became the primary factor determining if a bull would continue to reproduce or not. Because of these conditions, Karl argued that the AI technology gave veterinarians unprecedented authority in shaping the agricultural market in terms of which bulls would breed and what characteristics they would have. Both Felicity’s and Karl’s contributes to a broader understanding of the climate of farming during the early 20th century. Although the topics covered by Felicity and Karl are not specifically part of the FIELD objective, their research is important to keep in mind as we uncover experiences of endemic disease from the same time.

Our keynote speech was given by Erica Fudge who is a professor at the University of Strathclyde and the director of the British Animal Studies Network (BASN). Erica presented us with a paper entitled ‘The Cows of London’, giving us a glimpse into her book “Quick Cattle and Dying Wishes”. During her presentation, Erica explored how cattle were experienced by different people in the 17th century. Using wills of the deceased, Erica made a case for a different experience of cattle between rural and urban settings, with cattle present in 5% of rural wills but only in 0.07% of urban wills. Erica argued that the lack of cattle in the wills of urban dwellers does not suggest a lack of livestock in the area, but rather a different experience and value of cattle. Erica described the urban experience of cattle as brief, smelly, noisy, and disruptive as they were brought into town to be slaughtered and then consumed, resulting in them being seen more as a commodity. On the other hand, people living in rural areas had responsibility to care for cattle over a long period of time. Erica gave the example of a farmer from Essex who left three cows to his three daughters, which the farmer described as ‘my northern cow’, ‘the cow with one eye’, and ‘my old cow’. According to Erica, we can see this will as evidence of a more caring relationship between owner and animal. Erica’s presentation highlighted the nuances of human-animal interactions, and in doing so, challenged the standard notion of the hardened sensibilities of the rural worker in contrast with the sensitive urban dweller. Listening to Erica’s work I was struck by how it spoke to modern discussions of consumer experiences and perceptions of livestock, something that FIELD has been exploring through the FIELD Farm activity. 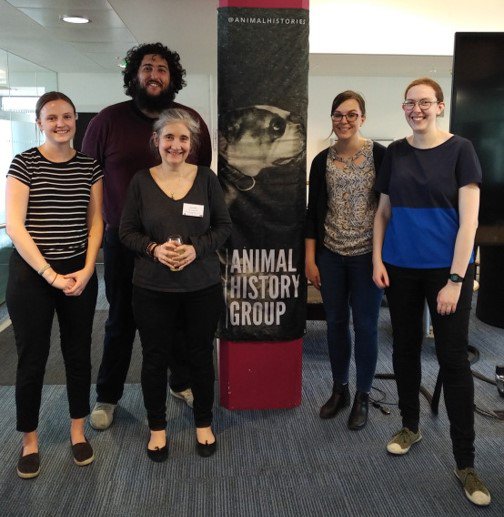 During the conference we had a health panel which I was particularly excited for, given the potential for takeaways relevant to FIELD. As part of this panel Evelyn Welch and Kathleen Walker-Meikle presented ‘The Itch and the Scab: Mange in Early Modern Europe’, giving us a look into their work for the KCL Renaissance Skin project. Evelyn and Kathleen described how itchy skin was a typical part of life for both human and non-human animals in early modern Europe. According to Evelyn and Kathleen, prior to the 16th and 17th century, mange in humans and mange in animals were understood as two separate conditions. However, Evelyn and Kathleen illustrated how notions of mange in humans and animals changed in the 16th and 17th centuries when animals began to receive the same treatment as humans. These treatments were described in typical household ‘recipe’ books. Evelyn and Kathleen’s research had me reflecting on the history of veterinary medicine, and the way that we conceptualize disease in animals- key themes to the FIELD project. Additionally, Evelyn and Kathleen’s work may not just be a window into the far distant path. For example, Alex Bowmer (co-convenor of AHG) describes instances of farmers in the 20th century often treating themselves with materials and tools they used for their livestock in his PhD thesis “Dipping, Dosing, Drenching: Managing unhealthy beasts”.

Also presenting on the health panel was Rosie Mack from the University of Reading, who presented ‘The Equine Foot in Ancient Greece from the Classical to the Hellenistic Period’. I was thrilled when I read Rosie’s abstract ahead of the conference as it was the first historical work that I had come across dealing solely (no pun intended) with the feet of an animal, given that my PhD also deals with feet. During her presentation Rosie described the importance of the feet of Greek horses in the period from c.470 BC to c.180 BC. Rosie explained that as horses were not fitted with horseshoes at the time, it was massively important that their feet be strong so they could make long trips into battle and could compete in races. The ideal hoof had a thick wall, had a plush sole, and would make the sound of a cymbal when the horse walked. Rosie presented us with images of horse hooves taken from sculpture and coins to illustrate the ideal qualities of the horse foot for the time. Additionally, Rosie pointed out the pervasive nature of the idealized hoof within Greek culture, citing the Greek myth of Pegasus who struck the earth with a hoof so powerful that springs of water erupted. Rosie’s work illustrated the impact that a single body part can have on the entire value of an animal, something that is also seen when it comes to lameness in sheep. Although sheep may not be heroes of war like the horses described by Rosie, their feet also contribute to their value. Sheep need to be able to walk so that they can eat and bring a profit to the farmer. Rosie’s presentation ultimately had me wondering how sheep’s feet (and lameness) feature in the larger history of sheep farming in the UK- a question I will continue to ask myself throughout my research.

The conference ended with a round table discussion between Erica Fudge, Abigail Woods, Jane Hamlett (working on Pet Histories) and the audience. The theme of this discussion centred on the diverse nature of the academics contributing both to the conference as well as to the wider field of Animal History. At one point, Abigail asked, by show of hands, who considered themselves an ‘Animal Historian’. The response from the audience was hesitant with some people raising their hands halfway and others looking around to see how other people had responded. Looking back, I am not surprised by the audience’s hesitancy given how the speakers described themselves in their biographies. Not one speaker had identified themselves as an animal historian, despite speaking at an animal history conference. I think this says a lot about the nature of animal history- it seems to be interdisciplinary in nature, relying on animals to tie together different stories and ways of thinking into one narrative. Jane Hamlett summarized the value of Animal History perfectly, saying that the conference had demonstrated the strength of Animal History as a tool for intersecting wider themes of social and cultural history, addressing ideas in the history of technology, the history of emotions, and the history of politics and governmentality.

Ultimately, the Animal History conference provided me with so much material for reflection. The interdisciplinary nature of the conference felt like a microcosm of the work we are doing for the FIELD project; connecting a variety of ideas and backgrounds to intersect at the boundaries of animal health and welfare.