In the latest FIELD blog social scientist Niamh talks through the second of the early career researcher meetings, reflecting on the first year of the FIELD project and the development of interdisciplinary working within the team. 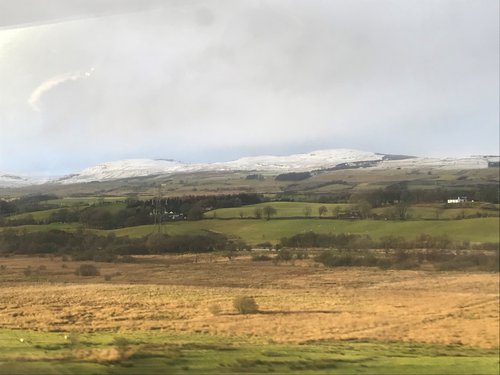 A year goes by so quickly when your part of the FIELD project! So with a bit of planning the six early career researchers (ECRs) on the project – four research associates (myself, Beth, Ewan and James) and two PhD students (Maria and Nicole) met up in late December, almost a year after our inaugural ECR meeting, for another, this time at the University of Glasgow.

Snow on the hills between Edinburgh and Glasgow 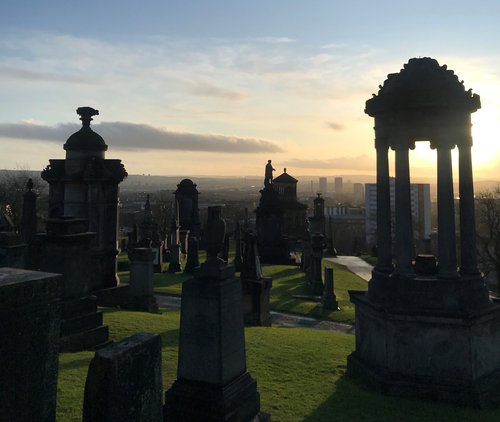 Early evening views of Glasgow from the famous necropolis

We started the morning session with a brief catch-up from each of the ECRs, presenting to each other what we have done since we last met. This productive session brought everyone up to speed on the work of the three disciplinary clusters, which included paper writing by the modelling cluster, several oral presentations by the historians, numerous successful public engagement activities conducted by all and the start of the social scientists’ fieldwork season. It also gave us the time to ask questions about our work and give constructive comments and suggestions.

The second morning session focused on our plans for the future, in which we talked about what we hoped to achieve over the coming six months, including possible avenues for future collaboration and more public engagement activities. We also took the time to identify and discuss potential opportunities to work together and support each other going forward both in terms of intra- and inter- disciplinary working. The importance of sharing key pieces of literature was an emerging theme in this session and the idea of a monthly ECR reading group was proposed.

We took a break at this point to have festive group lunch at Paesano Pizza, a pizzeria near the university campus. This was recommended by Maria as an institution amongst students at the University of Glasgow. I have to say it was an excellent choice and we all thoroughly enjoyed it!

The afternoon session was dedicated to a discussion of the concept of ‘interdisciplinarity’. This is a key theme of the FIELD project and something we are aiming to foster amongst all the members of the team, not just the ECRs. We initially took some time to reflect on the opportunities, challenges and barriers to interdisciplinary working this year, before a conversation about the need to step outside of our disciplinary comfort-zones. A key outcome of this session was identifying the need to interact and collaborate more over the coming year. ECR meetings, such as this one, were acknowledged by all as a valuable way to share ideas and conceive of new avenues of inquiry; more would be beneficial, with the aim of doubling the number of ECR meetings in 2020. In addition, ‘work shadowing’ was mentioned as something to continue to pursue, both between and within the members of the disciplinary clusters. Fieldwork will be a valuable opportunity for the social scientists to demonstrate to the other clusters how we gather primary data. Finally, sharing literature was also identified as a way to stay in regular contact with the other ECRs. The monthly ECR reading group will facilitate this.

The meeting was a great opportunity for the ECRs to reflect on our achievements over the past 12 months and plan for how to make the coming year even more productive. Roll on 2020!