In the last of her three guest blogs, Georgia Bulis-Gray continues to explore the sexualisation of dairy, this time focusing on cheese.

Through researching the advertisement of dairy in the 20th century, the utilization of the female body was undeniable. The female body is used as a brand in itself, completely obscuring the product in many instances and, instead, exemplifying the utility of sex to sell any product, even one as unexpected as cheese. 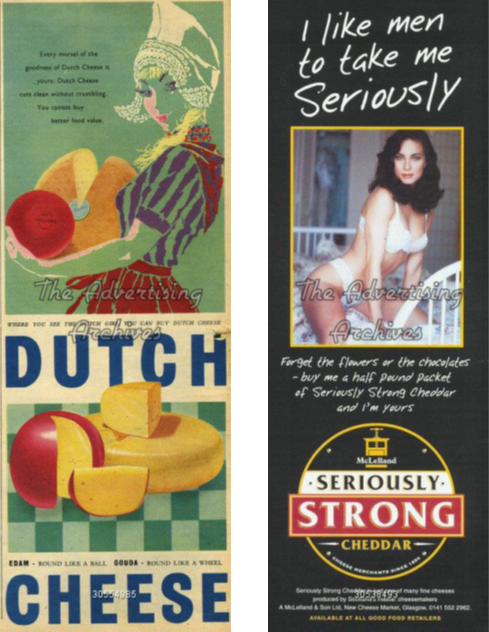 The Seriously Strong Cheddar advert is intriguingly aware of its own absurdity; the advert makes no real claims about the benefits of the product but merely utilizes the image of a woman’s body to capture the viewer’s attention, and plays on the obvious joke in the disconnectedness of the photograph and the product being sold. It is utilizing the basic premise that the image of a woman’s body sells products, no matter what they are. The joke comes from the text that reads “I like men to take me seriously” accompanying the image, since we are taught that a woman cannot and should not be taken seriously if they appear sexually appealing. By minimizing a woman to the status of a joke and an image to sell cheese, of all things, the advert makes an important statement about the role of the female body in our society, that it can be so easily used and so easily understood in this way; as a joke and as an object on a page.

The Dutch Cheese advert functions in a slightly different way. The woman in this image is not overtly sexualized, however, the connotations of the milk maids outfit she is wearing along with the unquestionably seductive facial expression and notably prominent sideways profile of her chest and waist (and I won’t go into the meaning of her holding balls of cheese) , all confirm the intentionality of choosing this “Dutch girl” to represent their cheese brand. The importance of her look is confirmed when the advert explicitly implores the viewer to look out for her image: “Where you see the Dutch girl you can buy Dutch cheese”. A question of social status is further incorporated into the rhetoric here, as she is not only a woman and a body but also a producer and seller of a coveted product. This advert seems to appeal not to women specifically but all consumers, perhaps more so men, who are trained and encouraged to seek out this female form.

Comparing the images, it is striking to notice how similar they are. Each woman looks directly at the viewer, either inviting them to want her or to want to be her. Each woman is portrayed in impossibly perfect physical form, and their clothing is either minimal, sexual or non-existent. Whether the advertisers utilize the female form in a knowing sense to catch the eye, as a joke to sell a memorable product, or as a genuine attempt to engage the viewer’s desires, each advert explicitly links their dairy product to the sexuality of a woman.