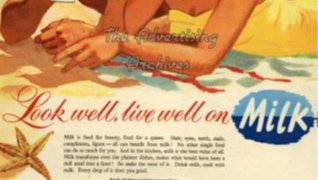 In the second of her guest blogs, Georgia Bulis-Gray introduces another theme to have emerged from her print advertising analysis of changing attitudes to animals, food and farming in 20th Century Britain - the sexualisation of dairy.

Through my research into the history of dairy advertisements in Britain over the 20th century, an unavoidable, unexpected and uncomfortable recurrent theme arose. The sexualization of both women and, by extension, the products themselves occurred time and again, especially in the advertisement of dairy. Seemingly irrespective of time period, this trend turned up in some worryingly recent advertisements. This post explores milk advertisements. 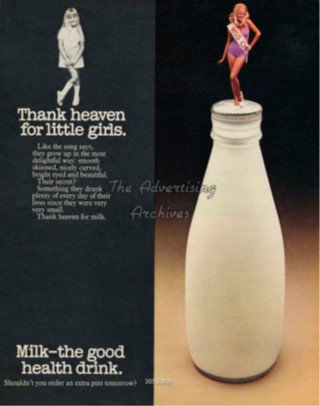 Understanding this first image required a far deeper appreciation of the 1970's existence than my twenty-one year old brain posessed; however, once I discovered more information about some of the cultural references implied in the advert from my relatives who lived through the decade… I still didn’t understand a thing. Drawing on lyrics from Maurice Chevalier’s song, the advert praises the future good looks of the very young girl to the left of the image, and implies that her impending success in this beauty peagant is all down to her drinking milk every day. In spite of the tag line “Milk- the good health drink” at the bottom left of the image, the rest of the advert seems far less preocupied with health than with the skin, curves and beauty of the female body. The direct link created between the young and grown women, implied by their mirrored stances, is, in itself, an uncomfortable sexualization of the female child’s body, but accompanied by the words which reinforce such objectification, this advert leaves no doubt as to its message. Nonetheless, it would be unfair to analyse this piece in complete denial of the obvious intentionality of its humour; especially in the context of the 1970's, before such attention had been drawn to the regular objectification of the female body, such an image would probably have been taken for a lighthearted, striking image, simply playing on the obvious hyperbole of the product’s claims. Nevertheless, for my purposes here, the image paints a problematic picture of the oppositional yet often simultaneous sexualisation and infantalization of women for the sake of selling a product. 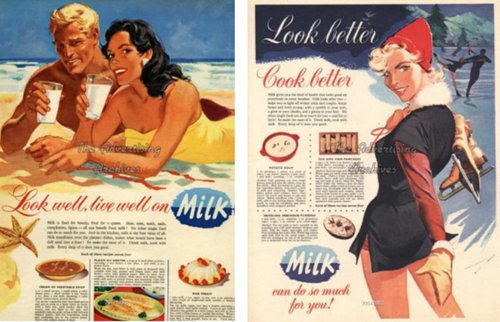 The next two pictures are dated 1950 and 1970 respectively, however they appear to be part of the same Milk Marketing Board campaign, clearly targeting adult women, promising them the beauty, vitality and lifestyle of the two women represented in the images. The text of both pieces reinforce the focus on appearances: “Look well” and “Look better”, and both further consolidate the gendered confinement of women by not only urging the reader to become more attractive but also insisting that they remain the perfect wife and mother by cooking wonderful meals with milk. Both women appear to be needlessly seductive in their stances and attire (especially the skating woman who, apparently, also acquired the ability to repel the cold due to all the milk she has been drinking). Once again, in spite of the secondary use of the health incentive, the main prerogative of these adverts is clearly to persuade women that drinking milk will make them desirable to men.

In the last of this three blog series, Georgia discusses how this theme extends to other animal products - cheese.