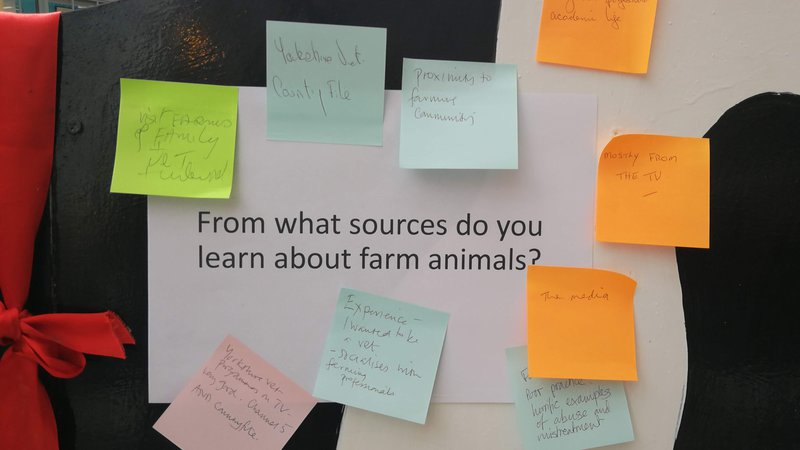 Over the past three years the FIELD project has run a range of engagement activities across the country with members of the public, which have explored UK cattle and sheep farming, and animal health and welfare. Here we reflect upon the value of these creative methods for creating opportunities for in-depth engagement, especially for a potentially contentious topic such as livestock production.

Recent changes to the way UK agriculture is governed has refocused attention and debate on the use of public money to subsidise public goods, including whether certain dimensions of agriculture should be considered as public goods in themselves e.g., livestock health and welfare. If this is the case, surely the public should have a say in how their money is used? Public engagement in science and policymaking is acknowledged to be a valuable tool, providing greater accountability, institutional trust, relevance and responsiveness. The new Agriculture Bill and the National Food Strategy provide a unique opportunity to engage the public.

Studies have frequently demonstrated growing public concern over certain aspects of food and farming, and concurrently a disconnect from the realities of modern agricultural practices, and especially a lack of knowledge and awareness of more modern production systems. In particular, concerns have been raised in relation to farm animal health and welfare, the environmental impacts of animal agriculture, and food safety. A greater understanding of the concerns the public holds, and an understanding of how the public think farmers should be supported going forward is important.

We used a range of creative engagement methods to involve the public in discussions of food and farming at this key juncture of UK policymaking.

Presented below are three examples of the engagement events held to investigate these concerns and disconnects to evidence the power of creative engagement. Specifically: 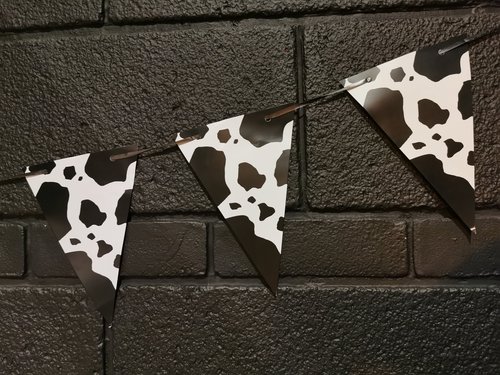 “When the cows came home” was an afternoon of listening and conversation held in Berwick upon Tweed. Eighteen members of the public joined members of the team to share their memories of livestock, in particular cattle. All participants were over 45 years and local to the area, with several either currently or previously having worked on farms. The event began by playing the attendees several different recordings from oral history interviews with vets, centered around the themes of tradition, the physicality and hands-on nature of the role, and the relationships involved (be that human-animal or farmer-vet).

Following some initial reflections, attendees were then split into three groups with a member of the research team facilitating discussions in each one. Paper tablecloths used to keep track of the stories shared from the participant (Picture 1).

Attendees shared memories on a range of topics, from cattle on trains and in lairage at the docks, to the real and present danger of working with livestock. Also discussed were the changes seen in their times spent in farming, including the two foot and mouth disease outbreaks in Northumberland in 1967 and 2001 and the first female vet arriving in the area in the 1950s. The nature of cattle was also mentioned by several attendees, describing how cows had friends (you could tell because they licked each other) and how cows had memories (after a man wearing a white coat came to tuberculin test them, they wouldn’t come in to be milked by a man in a white coat).

Overall, the attendees fed back that they really enjoyed listening and sharing memories with those of a shared interest. Not only was it an opportunity for them to learn more about farming in the area from those who had and continue to be involved, but it was also beneficial for us as the research team to see the range of different topics raised, how they were discussed and the enthusiasm for an audience to learn more

2) Historic and contemporary images of farming to prompt discussion of the past, present and future of livestock agriculture 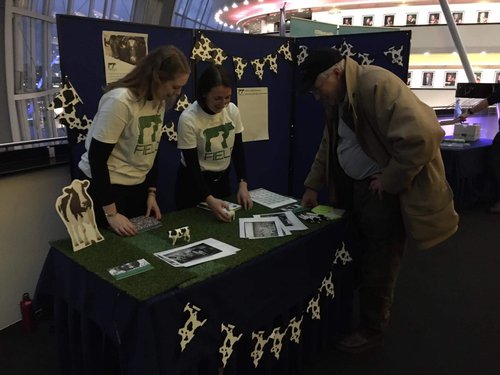 Held as part of the Royal Society “You and the Planet” series, this event focused on what the future of farming may look like through the examination of past and present practice, and the drivers underpinning the changes that have taken place.

To achieve this, we used two series of images of sheep and dairy farming, sourced from our project partners the Museum of English Rural Life, to prompt discussion. The images covered a timespan of the 1950s to the present day, and all were presented in black and white. Participants could choose the series of images they’d like to look at. They were then asked to guess the decade of image and explain their guess. This acted as prompts for discussions about what farming is like now, how it has changed, and what it might be like in the future. Participants could also vote for and write their thoughts on the future of farming on a sticky-note wall.

Most of those who took part were very attentive to the photos, trying to use the details that they had spotted as a means for dating the images. There was a range in accuracy in identifying the correct decade, and plenty of discussion surrounding farming changes. Several participants also shared their own memories in relation to the photos, including working or staying on farms. In response to the direct question of ‘Does livestock farming have a future?, the majority of responses were either positive (59%) or neutral (35%). Four themes were identified in relation to the sticky-note question ’what might livestock farming look like in the future?: positive role for livestock farming; changes to be made; different scenarios possible, and; no future for livestock farming. Most of the responses given related to the steps that would need to be taken to ensure that livestock farming could continue more sustainably. These primarily related to reduced meat consumption, and higher welfare, lower input farming systems. A couple of respondents had noted that there may have to be a change to the current subsidy system to be able to support this.

This was a useful event to take part in as the audience attending were already interested in the topic of food and farming. The photos worked really well as prompts for further discussion, and especially amongst an older audience generated personal memories

3) A choice-based decision-making game that put participants in the shoes of a farmer, accompanied with sticky note questions and structured interviews used to capture the decision-making rationale. 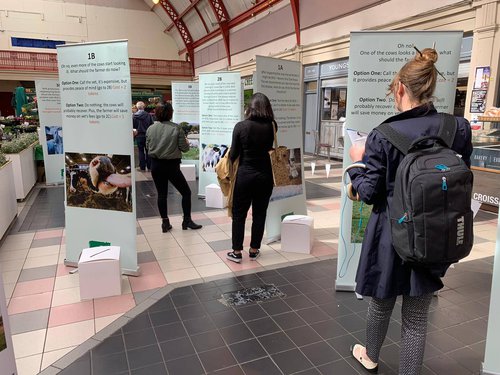 The largest of the engagement events to date was held over two days in the Grainger Market (an indoor food market) in Newcastle upon Tyne and aimed to explore public perceptions on livestock health, welfare and disease. The activity had three stages:

Stage 1: A choice game, entitled “Dairy Dilemmas”. Participants took on the role of a dairy farmer and made a series of three decisions, each involving a trade-off between animal health and welfare and the profitability of a farm. A total of 186 participants took part over the two-days.

Stage 2: Participants were encouraged to answer questions in the form of short sticky-note comments. These were a subset of the interview questions (stage 3) designed to capture responses from a wide range of participants. A total of 295 comments were received over the two days.

Stage 3: Short, follow-up structured interviews with 52 opportunistically sampled participants over the two days of the activity to explore the choices made in the game and sticky-note questions more in-depth.

The activities revealed that the public have a strong interest in farming and livestock health and welfare, a long memory of previous livestock disease events (i.e. foot and mouth disease) and, a preference for high welfare standards and local produce. The public valued opportunities to discuss and learn more about food production, with them highlighting that there are limited opportunities to do so. Participants were able to think about complex and potentially ethically difficult issues raised in the game, including animal health, and trade-offs in farmer and consumer decision making, and could reflect on their decisions made in the game and the implications of these.

The activities highlighted a public willingness to enter in-depth and meaningful conversations surrounding livestock health and welfare, and that the public have a strong interest in, and memories of, livestock farming through a range of different encounters and experiences. They were happy to share these memories and were interested in having more opportunities to do so.

The creative and interactive methods we used allowed the research team to engage with different groups of publics at each event, providing a range of insights. The range of events and locations facilitated engagement with audiences typically unlikely or unwilling to interact with traditional forms of science communication, especially by going outside of the University space to run events. The events engendered an environment of non-judgmental communication between science, agriculture and the public, providing a space for group reflection and recollection. Such activities could be used to make policy and research more inclusive and democratic.

Overall, public engagement has the potential to provide individuals with a space to reconnect with agriculture, and to build greater trust in policymaking through more open and inclusive conversations. We recommend that policymakers take more creative opportunities to engage with different publics to make policymaking more democratic and responsive to public concerns.

This blog post expands upon a poster presented at the Universities Federation for Animal Welfare (UFAW) conference. For further details on these or upcoming events email: beth.clark@newcastle.ac.uk.