Callous Caring: The myth of dichotomy in farming

Choices and viewpoints are often seen as "one or the other". The representation of farming in the media is no exception. Artist in residence Shane Finan explores the tension between care and necessity in his latest blog.

We are easily sold on stories of heroes and villains. In fact, it is often encouraged by aggressive stances such as those put forward by farming, vegan, environmental or business groups. These stances reinforce good and evil dichotomies, and depending on where we each find ourselves on a given spectrum, we emphasise these stories to villainise the “other”. Over the past year, in a time of pandemic, decisions have been made that struggle with these complexities of otherness: Should the virus be allowed to spread to protect an economy? Or alternatively, should an economy be allowed to stall to protect the health of citizens? These decisions are often presented in media as simplified choices between health or economy, but of course they are far more complex. If businesses close, how are owners compensated? How do we deal with rising suicide rates during social isolation?

Nothing in the real world runs on dichotomy. It’s a simplification, a way to tell children stories so that they understand moral positioning and reasoning. As we grow, we begin to understand the complexities in all decisions, and “right and wrong” answers become untenable. But the simplicity of a dichotomy can hold attention, and so they are often used in media and particularly social media to create heroes and villains, in narratives of “us” versus “them".

Livestock farmers cannot afford to waste time on dichotomies. The complexity of stewarding animals is not as easy as just raising and cutting down a cash crop. Animals have individual personality; they have behaviours and motivations that we can’t always understand; they are sentient, thoughtful and caring. Farmers have always known this, and see it constantly. The space that livestock farmers exist in swings between what many of us would recognise as care and callousness.

I have visited ten farms since I began working as an artist in residence on the FIELD project – six in England, two in Scotland, and two in Ireland. On each, the farmers’ perspectives were vastly different. Some justify their decisions by money alone (“this is a business and animals are stock”), others insist that the most important thing is care for the animals (“the animals should only have one bad day”). Each farmer saw themselves in a particular way, but none was entirely true to their perspective of themselves. They all presented a degree of callousness and a degree of care, often contradicting themselves in short spaces of time. One farmer insisted that they would never keep animals that were prone to disease, as they would breed this weakness into future generations, then later introduced me to a ewe that had consistent health problems but that was being kept in the hope that she would recover and “become stronger for it”. The same farmer admitted this contradiction with one short statement: “I must be getting soft”.

This anecdote is typical of all the encounters that I have had to date. There is of course a pragmatic side to farming. All livestock farmers accept death as a part of life on a farm, but there is also something more nuanced, a personal side.

To be able to care for an animal and then kill it is difficult. The designer Anne Galloway collaborates with sheep as part of her more-than-human lab in New Zealand. She also farms them. She sees this as non-contradictory, and as part of a practice of “undesign” that seeks to remove the otherness of animals from our perception of sheep. Citing Donna Haraway (Haraway, 2016), she sees this as a part of “sym-poeisis” or “making with”, a collaborative practice that is not farm, not design, not human, not non-human (Galloway & Caudwell, 2018). As a farmer, she sees how both care and callousness have their place, and sees killing as part of a practice of renewal. This practice of farming as design is one way of bringing a farmer’s complexity into another field of study.

Nuance is an important part of who we are, as a species. We can crave a dichotomy, but the harder we look, the less likely it is that we will find it. Somewhere between the dichotomy of care and callousness, is a truth in farming. 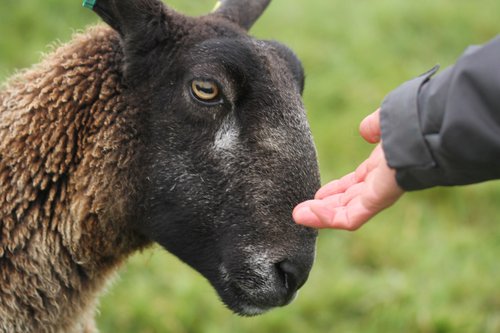 All images are copyright (c) of Shane Finan.

Galloway, A., & Caudwell, C. (2018). Speculative design as research method. Undesign: critical practice at the intersection of art and design. Routledge, 85-96.