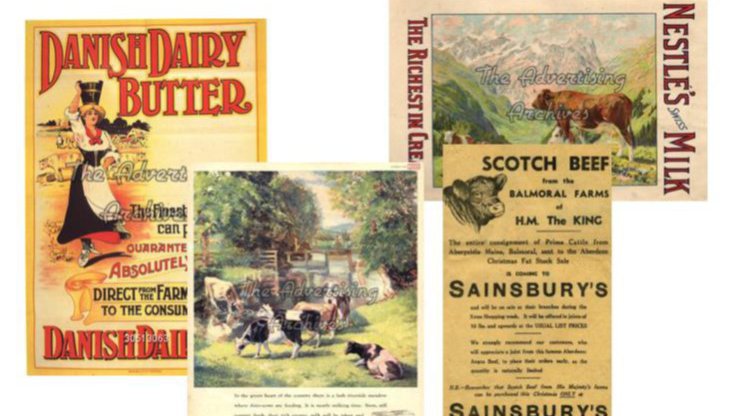 During the process of researching the advertisement of meat and dairy in Britain over the 20th century, one of the most interesting topics to investigate was how advertisers have chosen to depict animals. The analysis produced striking results:

These results are very clear: in the latter part of the century, anthropomorphism became the most popular way to represent animals in meat and dairy adverts.

Here are some examples of pre 1950 advertisements depicting animals. 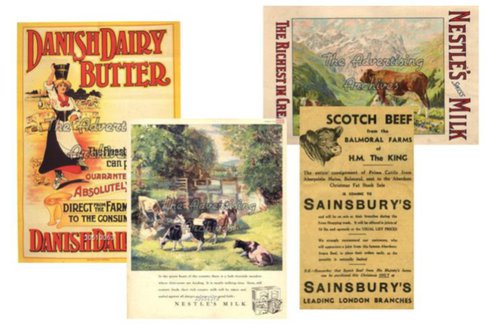 You can see in these images that, as well as the animals being represented fairly realistically, the adverts also tend to include some reference to the process of farming. The Danish Butter advert depicts a milk maid and also contains the phrase “Direct from the farmhouse to the consumer”. The second image contains the sentence “It is nearly milking time”. Whilst the final two adverts do not as explicitly show the link between the animal and their product, it is quite clear that the animals depicted in them are in some way involved in the final product being sold. E.g. the cows in the Nestle Swiss milk advert are wearing cow bells, clearly domesticated (if living on a slightly unrealistically idyllic Swiss mountainside); the Scotch Beef advert uses the word “cattle” as well as the word “beef” which clearly tells customers that the cow depicted is also the beef that is being sold.

Here are some adverts from the second half of the century. 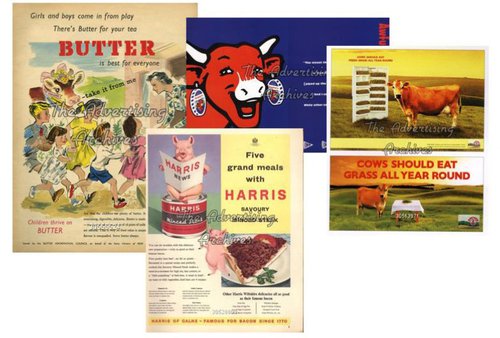 The difference is shocking. Only one of these adverts shows the animal in a somewhat natural setting (the Anchor Butter advert on the far right) yet even here the scene is humanized through inserting household furniture. In two of the adverts (far left Butter advert and the Laughing Cow cheese advert) the animals are depicted as speaking about the product. The most bizarre example is, arguably, the Harris minced steak advert which uses a pig to advertize a beef product (since the brand was mostly known for its pork). Humour is used to some extent in all these adverts. Only the Anchor Butter advert uses anthropomorphism to talk about the animals own experience of the production process, whilst the other three adverts all use the animal to reassure the consumer of the healthfulness or tastiness of the products for them.

Upon reflection, these results are not at all surprising. The trend towards anthropomorphism fits in with an increasingly industrialized agricultural industry. As meat and dairy products became more dissconnected from the animal (both literally through the addition of many stages to the food processing chain of production, and figuratively in the public’s awareness), advertisers used anthropomorphism to safeguard their consumers’ support. Whilst adverts from the 1950's, 1960's and 1970's utilized this technique to further distance their products from the animal through use of more obvious humour and fictionalization, from the 1980's onwards, anthropomorphism began to be used to reassure consumers of the animals’ happiness and complicity in the process, amongst hightening concerns about animal welfare in the food industry.

In the next blog, Georgia will talk through another of the themes to have arisen from the print advertising archives.